Disengagement costs organizations money through lost productivity, not to mention the risk of errors that a disengaged workforce brings. Yet in August 2017, Gallup reported that only 32% of people are engaged at work.

Much of that drama can be traced to storytelling, with employees creating tales that have little basis in reality.

“Stories are very powerful, and the most powerful are the ones we tell ourselves,” says Vicki Hess, MS, RN, CSP, speaker, trainer, and consultant for Catalyst Consulting, LLC, in Palm Beach Gardens, Florida, and author of several books, including SHIFT to Professional Paradise: 5 Steps to Less Stress, More Energy & Remarkable Results at Work. Stories can be helpful or hurtful, and the hurtful ones can lead to disengaged employees.

But storytelling can also be a positive force, drawing staff to organizational goals and helping them feel they are contributing to the organization (sidebar below).

OR Manager recently spoke with Hess, Wakeman, and Sandy Coletta, author of the book The Owl Approach to Storytelling: Lead With Your Life, and a past hospital president, to explore the two sides of the storytelling coin. Their insights may help OR leaders establish better relationships with staff and between staff members, reduce stress, and increase job satisfaction. 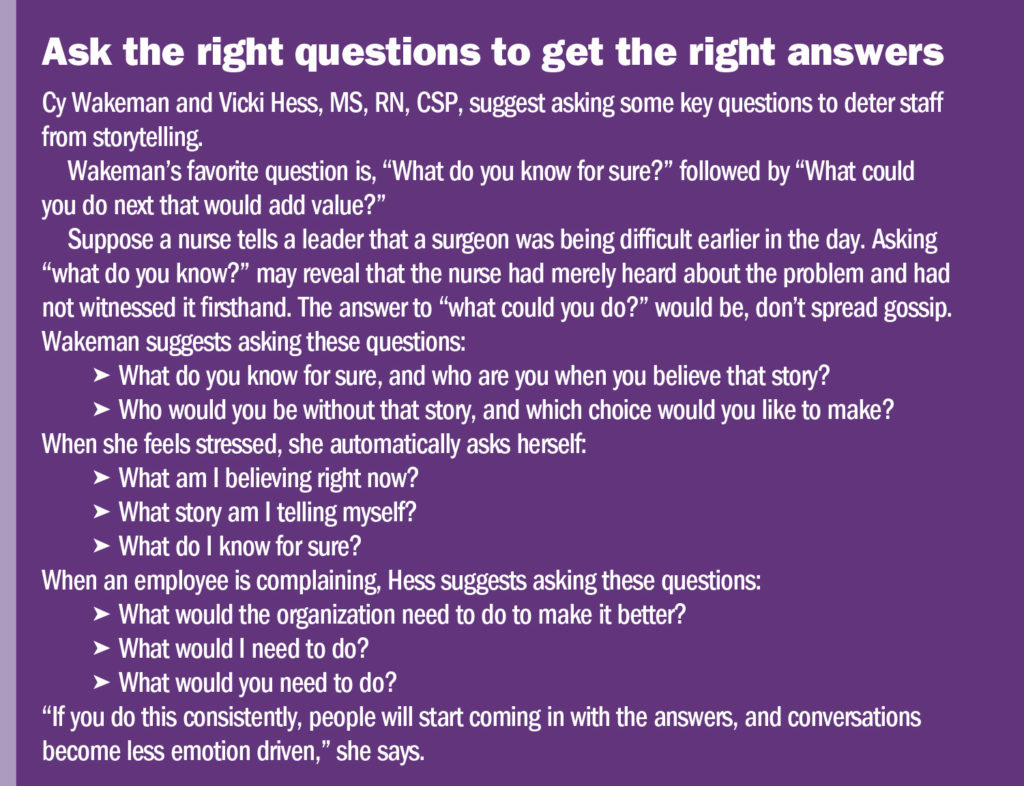 Why we tell stories

As human beings, we’re hardwired to have some anxiety, Wakeman explains. That anxiety helped our ancestors survive in a world where they faced physical harm, so it became embedded in our DNA.

“Telling stories paints reality, even if it’s negative, in our favor. It removes us from responsibility—it’s always somebody else or something else at fault,” Wakeman says. In the short term, this type of storytelling relieves stress, but a steady diet ultimately leads to chronic stress from the emotional waste of the drama created by the story.

Hess adds that storytelling can be a way to get attention. “People tell negative stories because they don’t feel like they are being heard,” she says.

Leaders can eliminate drama in the workplace by teaching people good mental processes, Wakeman says. Start by helping employees understand the thought cycle: An event triggers a thought, which in turn triggers feelings that prompt us to act based on those feelings, and our actions lead to results. (For real-life examples, see sidebar below.)

Our thoughts create real physiological changes. “If I’m sharing the story of the man who cut me off in traffic, I’m feeling the stress, even though it’s not happening now,” Hess says. “But if I share the story of my son’s wedding, I’m happy, and my body is responding in a positive way.” These examples illustrate that the brain is very powerful.

The thought cycle is predicated on thoughts that may or may not be accurate. “People tend to think that if they thought it, then it’s true,” Wakeman says. They then act on what might be inaccurate thoughts they have assembled into a story. Instead, people should approach an event with a “beginner’s mind” so they observe and consider a situation without adding mental commentary.

For instance, if your colleague passes you in the hallway without saying hello, instead of making up a story that she is being rude, give her the benefit of the doubt until you know the reason. Perhaps she simply didn’t see you.

“The freedom that comes with not having to believe everything I think is really profound,” Wakeman says.

The good news is that nurses are already trained to look at facts and not rush to judgment when it comes to patients. Wakeman cites the example of a patient with an irregular heartbeat: The nurse would first collect more information and validate what the problem might be before taking action. The trick is to encourage staff to use that same process in nonclinical interactions.

One technique is to help staff realize that our ego often “plays” us, causing us to react to a story, not reality. For instance, a nurse who is asked to work on a different OR specialty team for the day could choose to focus on the patient, perhaps learn something new, and try to be helpful—which would likely be a satisfying experience. If, on the other hand, the ego whispered, “you’re always the one who has to switch teams—it’s not fair,” the day would likely be unsatisfying.

“The misery comes from the story, not from reality,” Wakeman says.

Hess adds that leaders can leverage the thought cycle by considering it before making a change. “Think about people’s beliefs and mindsets, and how they drive actions and outcomes,” she says. 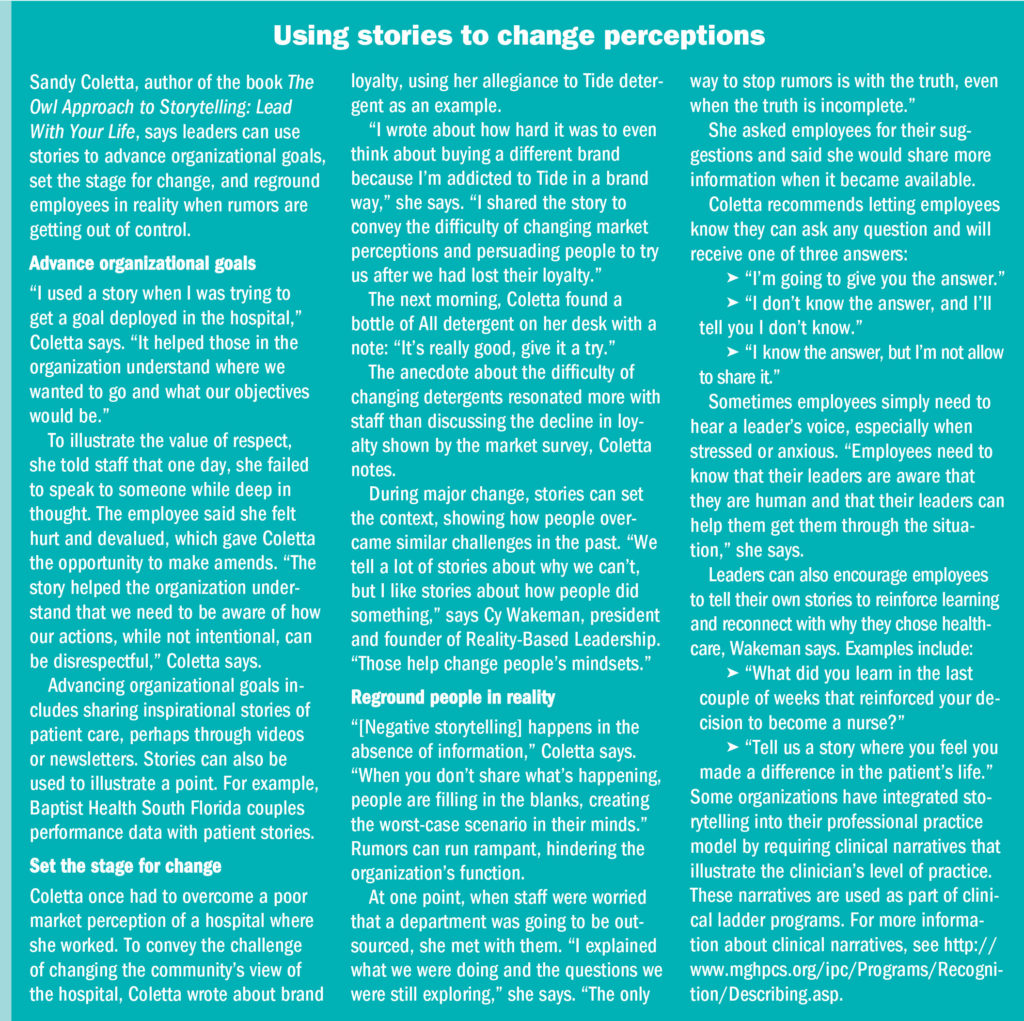 Resources for redirecting the story

Shared governance through a unit council, which many healthcare organizations already have in place, can be particularly helpful in this regard. “A unit council can help nurses realize that something might seem to work best one way, but when checking the evidence, another approach works better,” she says. “It can change how people think about a change.”

That analysis of beliefs and mindsets can also help determine why desired outcomes weren’t met. “Instead of jumping to the actions, back up to how our beliefs and mindsets might have influenced the outcomes,” Hess says. For example, if the OR staff think the new pharmacy procedures are a waste of time, they are unlikely to follow them.

Some leaders pride themselves on having an open-door policy, but Wakeman says that too often, the open door leads to storytelling sessions by staff. “Venting is the ego’s way to avoid self-reflection,” she says. “We vent about our story, not about our reality.” The story, of course, is usually more dramatic than the reality.

“Allowing people to vent reinforces the mindset that they’re the victim of their circumstances,” Wakeman says. People who see themselves as victims believe they have no impact, and they will disengage.

“If I can help them self-reflect, they can see where they could have impact, and they’ll naturally engage because we engage when we think we can make a difference,” she says.

Encouraging self-reflection starts with remembering a lesson learned in freshman nursing class: the difference between sympathy and empathy.

For example, when staff object to the increased focus on patient satisfaction because they are already “too busy,” the leader may be tempted to offer sympathy, with a response such as this: “Yes, it’s too bad we aren’t recognized for all the work we do, but we have to do this because upper management wants us to.”

A better approach would be to offer empathy: “Yes, we’re very busy, and I’m confident that we can work together to find a way to integrate outstanding patient satisfaction into our existing workflow.”

Hess says this type of approach focuses on the inherent choice in how to respond to a situation: Although something might not be negotiable because it’s a regulatory or upper management requirement, the team can choose to respond in a positive way.

What about employees who insist they need time to tell their “story”? Wakeman suggests managers reach for a clinical tool, SBAR (situation, background, assessment, recommendation). “Require people to use SBAR when they are talking to you about a situation,” she says. “It forces them to think about what they are going to say ahead of time and to have a more balanced approach.”

Another strategy to encourage people to move from venting to self-reflection is to ask, “What did you do to help?”

Wakeman calls this an “ego-bypass” tool. “It discourages people from venting about what other people didn’t do and helps them focus on what they might not have done,” she says.

Storytelling as a leadership tool

Storytelling doesn’t have to be a negative in the workplace; instead, it can be a powerful leadership tool. “Storytelling is an engaging way to teach a lesson,” Wakeman says.

Storytelling can be used to reinforce the positives, including the good part of being a leader. “You can share your own stories of ‘wow,’” Hess says, using the example of a leader returning from a meeting. “Instead of saying, ‘the meeting went OK,’ say, ‘it was interesting because I could problem solve and use some of the input you gave me to address the problem.’” She adds that stories can be drawn from work or personal life (sidebar below). 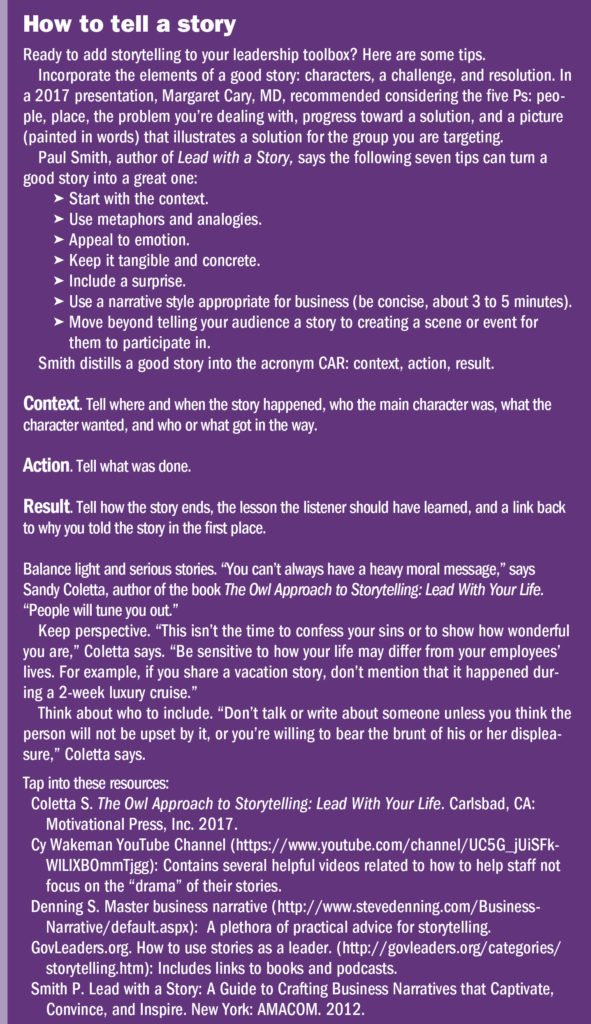 For leaders who want to embark on this journey, Wakeman advises first trying some of the techniques related to stopping inappropriate storytelling with those who are most likely to be receptive.

When it comes to sharing your own stories, Coletta recommends starting by tapping into your personal experiences to help connect with staff. “If you share stories, you are sharing your humanity as a leader,” she says. ✥

Takeaways and lessons learned from OR Manager Conference

After more than a year in hiatus, OR Manager Conference…

In its almost 2-year reign, the pandemic has exacerbated mental…