This relationship started with a conversation in an airport bar in Washington DC. We were discussing our similar cardiac surgery backgrounds and the Denver Bronco’s linebacker, Karl Mecklenburg, who, coincidently, was the son of a surgeon with whom she had worked.

This conversation has grown into more than 35 years of friendship and admiration for one of the top perioperative leaders in the country. 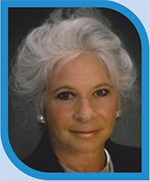 Seifert is a former president of AORN, past (and first) lead coordinator of the Nursing Organizations Alliance, fellow of the American Academy of Nursing (FAAN), and fellow of AORN (FAORN). She received AORN’s first President’s Award (1991–1992), the 2003 Award of Excellence, 2007 Jerry G. Peers Distinguished Service Award, 2014 Award for Mentorship, and 2016 AORN Foundation’s Nurse Philanthropist.

For this article, I asked Seifert a series of questions to further elucidate her thoughts and ideas on leadership.

Q: What is your leadership style and what helped you shape it?

Seifert considers her leadership style to be that of a player-coach. Her experience being on and managing a cardiac team is what helped form her style.

When she was “selected” to be the manager of a new cardiac surgery program at Fairfax Hospital, she knew nothing about cardiac surgery. Her guess was that she was chosen because she had the ability to work with “challenging people.”

The cardiac surgeon was reputed to be “difficult,” and the cardiac team members shared a similar reputation.

On her first day as manager of the cardiac team, she was acutely aware of her cardiac surgery ignorance, and she met with the team and admitted her ignorance. She also told the team she would learn from them and make them the best team in the OR. “Nobody laughed out loud,” she says, “but they were certainly amused.”

She started by learning to circulate and then scrub for cardiac cases. She asked a lot of questions and read numerous articles in cardiac surgical and related literature.

One day about 4 months into the cardiac service, she was scrubbing, and the surgeon asked her to move up to the chest to assist him. At that time, the RN First Assistant (RNFA) role was just beginning, and only two states, Idaho and Virginia, interpreted their nurse practice acts to include first assisting. Fairfax Hospital complied with the Virginia Board of Nursing’s requirements, and so Seifert began first assisting as well as promoting the opportunity to first assist to other members of the cardiac team.

She set up an RNFA class, and included surgeons, anesthesia personnel, and expert staff members as teachers. Any RN who had excellent technical skills and a desire to learn the role was included.

More than 40 years later, the cardiac surgery program (now called the Inova Heart and Vascular Institute) continues to use RNFAs to assist in surgical procedures. Seifert personally assisted in more than 3,000 cardiac procedures, and the experience, she says, gave her numerous insights into patients, colleagues, and administrators she worked with, as well as anatomy, techniques, rules, and other aspects of cardiac surgery.

“Having both clinical and leadership skills and responsibilities definitely strengthened me as a ‘player’ and as a ‘coach,’” she says. “It was as important to me to ensure that staff had the most recent cardiac surgery-related knowledge as it was for me to learn. It was crucial to share knowledge and never hoard it.”

Seifert notes that she had seen “intellectual hoarding” and found it not only “selfish” but inconsistent with her goals to provide the best patient care and develop the best cardiac team.

Q: What do you see as being your role?

Seifert says she came to see her role mainly as a leader (vs a manager) who:

• had a clear vision

• had respect for team members at all levels, RN and non-RN

• was able to create an environment in which surgeons, nurses, anesthesia personnel, perfusionists, and others could perform their best work

• wanted to help each team member to succeed.

“I had high expectations,” she says, “but I worked to be fair, to be encouraging, to provide ‘tough love’ when needed, and to make available the resources needed to achieve the highest level of practice desired.”

Q: What advice would you give a new leader?

“Make it your primary, personal, professional goal to help others succeed in an environment that focuses on patient safety,” Seifert advises.

“One of the ever-present considerations that guides our practice is that we have the ability to do harm,” she says, “so it must be a perioperative leader’s top priority to provide a safe environment for the patient and team members.”

In addition, because new techniques and technologies are constantly being introduced, it is important for leaders to delegate. “I was always willing to share the limelight and give credit to someone who showed an ability to partner with others, who was a problem-solver, and who wanted to do a great job,” she says.

Q: Was there a mistake you made that helped form you as a leader?

Seifert explained that she made a mistake early in her career that helped in how she handled mistakes made by others around her later on. An inadvertent break in sterile technique she made while circulating could have caused an infection in the patient.

“I realized the mistake a few seconds after I made it,” she says, “and I saw ‘my life pass before my eyes.’ I found my voice and clearly stated to the surgeon what I had done, and he swung his head around and stared at me. His headlight illuminated my face, and I froze. But all he said was, ‘get the antibiotic,’ and he turned back to the sterile field.” Seifert says she delivered the antibiotic solution to the sterile field and then “waited until the end of the case to be fired.”

When the surgeon broke scrub, and she was untying his gown, she said to him: “It was my fault. I am so sorry. It won’t happen again.” The surgeon looked at her and said, “Nobody’s perfect,” and he walked out of the OR.

Seifert was not fired, but she says she was given a great lesson in assessing a situation and person’s behavior. For years after that incident, she has remembered the surgeon’s response and has always tried to live up to the trust he had in her.

“He knew I was inexperienced and had made an honest mistake,” she says, “but he and I also knew that a repeat of the same mistake would not be tolerated, and that I was expected to learn from that mistake.” She has applied these lessons in her interactions with staff and other colleagues.

Seifert notes that when a staff member makes a mistake, it is important to turn the incident into a learning opportunity rather than an excuse for blame or ridicule. “The message to the staff person should be: ‘I trust you. Let’s look at what happened, how we can prevent a recurrence, what we have learned, and how we can apply what happened to make the system better.’”

Q: What is the biggest myth in the OR?

According to Seifert, there are several candidates, but a big one is that OR nurses are not critical thinkers and are too technology focused. Part of this may be related to the educational system that too often does not stress the importance of logic, wonder, what-if thinking, and other forms of curiosity, she says. “Students should be encouraged to ask questions, be skeptical not cynical, and consider alternative solutions, even if they sound crazy,” she advises.

Another myth is that OR nurses are not good preceptors. Though her “ego took a beating,” early on, she says, she had some “great, tough-love OR nurse preceptors,” who helped her learn and made her a better nurse.

It is important for leaders to match a preceptor to a novice, she says. “Some novices can deal better with bluntness, or what some would call an OR nurse’s ‘charm,’ and others cannot.”

Q: What were your feelings on being awarded an FAAN and an FAORN?

Becoming an FAAN, Seifert says, allowed her to teach her colleagues—non-OR nurses and physicians—that OR nurses do have a professional practice model that is as intellectually stringent as other specialties.

“I wanted to share my knowledge,” she says. “Our primary focus is the patient, and my surgical knowledge affects all caregivers along the continuum who care for my patients. On the other hand, I also wanted to gain knowledge of what med-surg and ICU nurses do and how it relates to the clinical needs of my patients.”

These conversations generated great interprofessional relationships, Seifert notes. So if there was a problem, no one hesitated to call the other.

Seifert says becoming an FAORN gave her the same teaching qualifications as becoming an FAAN, but it was more focused on perioperative nursing contributions to patient care.

She believes nurses all-too-often do not appreciate that they possess “incredible value.” What is usually missing, she says, is an ability to articulate that value verbally or in writing or to measure that value in a way understood by those in administration and finance who speak a business language rarely taught in nursing schools.

“For me,” she says, “becoming an FAORN was another vehicle to promote a perioperative professional practice model and to showcase the intellectually significant accomplishments that could be achieved in the surgical setting.”

Seifert is currently the chair-elect of the FAORN Committee, and her goals in this position are to educate members about the fellowship and suggest ways to achieve significant accomplishments. She is also a member of the OR Manager Editorial Advisory Board. ORM

—Judith M. Mathias, MA, BS, RN, is the clinical editor of OR Manager. Previously, she was clinical editor of the AORN Journal and a cardiac surgical nurse at Rose Medical Center, Denver, and Massachusetts General Hospital, Boston.