Researchers at the University of Michigan (U-M), Ann Arbor, have invented a new surgical instrument with the goal of addressing a vast, unmet need in minimally invasive surgery. For less than a thousand dollars, this platform technology—currently being commercialized by the start-up FlexDex Surgical—offers capabilities similar to those of the $2 million da Vinci surgical robot.

FlexDex, a mechanical instrument that mounts to the surgeon’s arm, enables the tip of the instrument to mimic the direction of movement of the surgeon’s hand. The company’s first product, a needle driver, was used at U-M in laparoscopic and thoracic procedures earlier this year.

Since then, FlexDex Surgical has shipped its needle driver to hospitals throughout the US for use in laparoscopic procedures, including hernia repairs and hysterectomies. The company plans to release additional instruments for the FlexDex Platform in the coming year.

10 years in the making

“This is the culmination of 10 years’ work, and to know it is performing exactly as we expected is an amazing feeling,” says James Geiger, MD, the Daniel H. Teitelbaum MD Collegiate Professor of Surgery at the U-M Medical School and pediatric surgeon at U-M C. S. Mott Children’s Hospital.

Dr Geiger is cofounder and coinventor of FlexDex along with Shorya Awtar, ScD, associate professor of mechanical engineering at U-M, and Gregory Bowles, BBA, chief marketing officer of FlexDex Surgical.

The technology began as a research project funded by the National Science Foundation in Dr Awtar’s lab.

Dr Awtar, whose background is in mechatronics and robotics, first heard of Intuitive Surgical’s robotic system when he attended a GE healthcare symposium in 2005. Dr Awtar was working in research and development at GE’s corporate headquarters at the time.

“When I saw the da Vinci robot, it was clear to me that the differentiating feature was its intuitive control of articulating instrument tips inside the patient’s body,” says Dr Awtar.

“It also was obvious to me that this [robotic] technology was not scalable, and that the technology in the form that it existed would not address the global market or even all of the US market,” he says.

When Dr Awtar joined U-M in 2007, he learned that Dr Geiger was also interested in developing a robotic technology that was affordable for all markets, and they began collaborating.

For example, until now surgeons have had two ways to stitch internally, he says. “They can use the old-fashioned straight-stick instruments that make complex tasks like suturing and knot-tying challenging and extremely difficult to learn, or they can use the da Vinci robot, which is not available at all hospitals and also has a steep learning curve.”

Dr Awtar noted that the paradigm assumed by most people involved with surgical instruments—including investors, surgeons, engineers, scientists, and business entrepreneurs—has been that having an affordable instrument means having to put up with lack of functionality.

“If you want high functionality and if you want articulation plus intuitive control, the only way to do this is with sophisticated robotics, and for that you have to pay the price,” he says.

FlexDex has disrupted this paradigm, says Dr Awtar. FlexDex provides the functionality of the robot at the cost of traditional hand-held laparoscopic instruments.

“It’s kind of like the transition from mainframe computers to smart phones,” he notes. 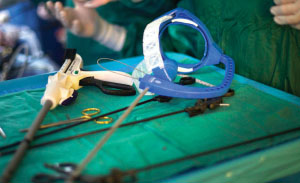 FlexDex on the Mayo stand before use. Image credit: Marcin Szczepanski, Michigan Engineering.

Technically, FlexDex is simple in its design. It is all mechanical, rather than electronic.

When Dr Awtar began designing FlexDex, he looked at why existing instruments were so difficult to use and how the robot overcame those difficulties.

Historically, every previous laparoscopic instrument has been designed to be held in a surgeon’s hand. The first departure of the FlexDex design from the norm was to mount the instrument to the surgeon’s forearm rather than have the surgeon hold it.

Dr Geiger adds that they see FlexDex as a breakthrough in both surgery and engineering. “FlexDex’s fully mechanical system amounts to remote control with no electronics,” he says.

“The magic of the device comes with the mounting of the instrument to the surgeon’s forearm,” says Dr Geiger. Because the surgeon isn’t directly holding the instrument shaft, this allows for intuitive control, or the ability to move the tip of the instrument with a hand motion. “It’s really like having your forearm being the shaft of the instrument going through the port, and your hand being inside the patient to do the laparoscopic procedure. That’s the level of functionality it gives.”

“The initial FlexDex product is a single-use, disposable unit with the needle driver attached, but that is not our long-term vision,” says Dr Geiger.

In the future, the bulk of the device will be autoclavable and reusable, and the tip of the device will be disposable. “This is similar to a surgical stapler, in which the back part of the stapler is reusable and the staple loads are the disposable parts,” he says. This eliminates the issue of cleaning and sterilizing a multicabled, complex device.

“FlexDex is also scalable,” says Dr Geiger. “In one case, I might just need an articulating Maryland dissector, and in another case I might need a Maryland dissector and a needle driver. I only have to use what I need. I don’t have to use a whole robot or the time and cost of a robot, when I only need articulation for a portion of the case,” he says.

“We will eventually have a full suite of instruments, and instruments for different specialties, but first we targeted the hardest task for surgeons to do, which is suturing and knot-tying in minimally invasive surgery,” says Dr Geiger.

Much of the growth in robotics stems from the suturing capability it offers, says Dr Awtar. “That is where we bring value, and we bring articulation to every OR around the clock and around the world. It can be used at any time, day or night, with no special robotic teams, and without special electrical requirements.”

“It is really an awesome device, and it has been amazing to follow FlexDex through its stages of development the past 3 years,” says Amanda Monroe, ST, a surgical technologist at C. S. Mott Children’s Hospital.

“The developers have asked our opinion every time they brought it into the OR,” adds Ken Henry, RN, OR staff nurse at C. S. Mott Children’s Hospital.

Having worked with both the da Vinci robot and FlexDex, Monroe and Henry say they prefer FlexDex. “The benefits of FlexDex include much lower costs and less setup time,” says Henry. “It also doesn’t take up any floor space, and it doesn’t require additional staff to set it up,” he says. “FlexDex is very simple to use, unlike the robot,” notes Monroe.

When the surgeons are ready to use FlexDex during a case, the circulating nurse opens the peel pack, and the scrub nurse takes the device and puts it on the Mayo stand.

“It is very easy for the surgeons to put on and take off, and it is comfortable for them to use,” says Monroe. “Our residents have been using it, and they have learned to use it very quickly,” she says.

Another plus is that FlexDex allows the surgeon to be more “hands on,” says Monroe, because the surgeon is at the sterile field, rather than at a distance from the patient.

Right now, the packaging is a bit large and bulky because the device is all one piece, notes Henry. But the next generation will be different, and it will be reusable.

“As soon as they develop the next generation with the detachable tips,” says Henry, “it is going to revolutionize how we do surgery.” ✥

May 2022 saw a critical shortage of the iodinated contrast…

Hospitals can still be better prepared for natural disasters

When a natural disaster strikes—whether flood, tornado, hurricane, or wildfire—nearly…

Staffing and labor costs have been consuming the thoughts of…