In the past few months, the Joint Commission has implemented a new process for accreditation surveys and changed the wording and interpretation of some standards, particularly infection control.

At the 2018 OR Manager Conference in Nashville, Tennessee, in September, John R. Rosing, MHA, FACHE, executive vice president and principal of Patton Healthcare Consulting in Naperville, Illinois, shared the changes that the Joint Commission announced recently.

New techniques the Joint Commission has recently implemented for conducting surveys include the following.

• New ways to do patient tracers. Intense surveyor training has resulted in increased capability to dive deeper into topics.

• New presurvey analysis of data. The surveyors carefully review an institution’s most recent survey report to identify any issues that warrant further attention and to see if the fix that was put in place after the last survey has been sustained.

• New standards and FAQs. There are always new standards coming out and new “frequently asked questions (FAQs)” about the standards, says Rosing, for example, the new infection control interpretations regarding high-level disinfection (HLD)and instrument sterilization, which have just been released.

“The goals of the new survey process are to shift the paradigm from periodic survey prep to actual sustainable systems improvement,” Rosing says. The focus is shifting away from passing the “exam” and achieving a “score” toward using standards to achieve and maintain excellent operational systems.

“They are looking for actual performance and execution, not simply a stated potential to perform in a compliant manner,” he says. 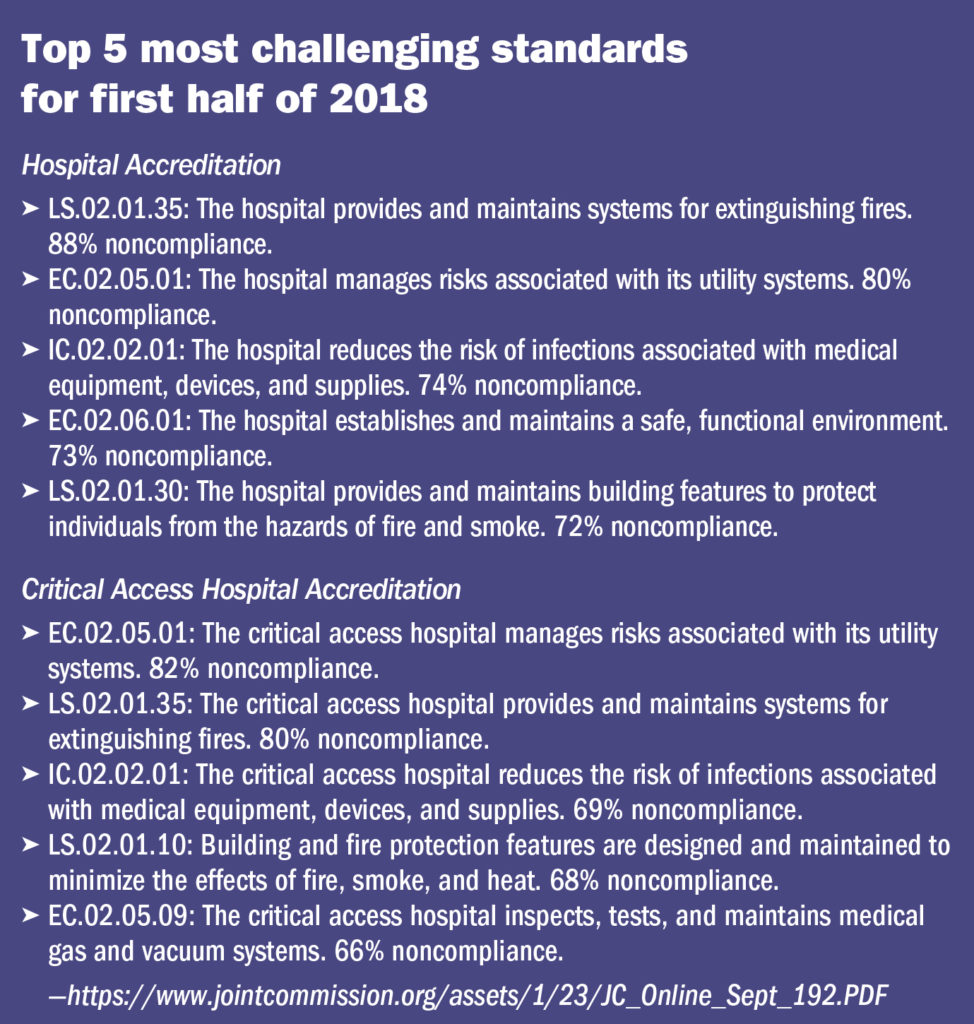 Central to a successful survey is mastering the most frequently scored standards (sidebar right). “The reason these standards are frequently cited is because the processes they entail are difficult to master; they are prone to variation or failure, and surveyors know this and thus focus their attention there,” says Rosing.

“It almost becomes an open-book test; hospitals are able to predict the top 10 or even top 20 most frequently cited topics. If you can confirm internally that you are compliant in these areas, you will have a leg up when a survey team arrives at your hospital.”

Though the issues cited most often seem to have little effect on actual outcomes, such as a brown cardboard shipping container in a patient area, institutions need to fix them and avoid a recurrence.

Often, action plans after a finding will say something like “staff were reeducated on this issue,” says Rosing. However, the problem may be not that the staff didn’t know what to do but that they weren’t competent doing it. Or they may have been competent but chose not to do something because they didn’t see the value in it.

“Managers need to be on their toes and be aware of whether their staff are following the procedure or standard work process to a ‘T.’ These are the things that often go undetected until a surveyor spots it,” he says.

A new addition in the past 2 years, The SAFER Matrix, helps provide perspective on survey findings. The matrix uses an algorithm to score a finding as low, moderate, or high, depending on its likelihood to harm a patient, visitor, or staff and whether the occurrence was limited, a pattern, or widespread.

Rosing suggested the following strategies for a successful survey:

• Fix a process sustainably or, if compliance proves elusive, go back to the drawing board to redesign a more reliable process.

A major shift happened September 1, 2018, when the Joint Commission announced several changed interpretations for how they will now survey and score an important infection control standard dealing with HLD and instrument sterilization, says Rosing. These changes should result in fewer findings at this standard.

Key changes were in the infection control (IC) standard IC.02.02.01 EP 2, which says: “The hospital implements infection prevention and control activities when doing the following: Performing intermediate and high-level disinfection and sterilization of medical equipment, devices, and supplies.”

The Joint Commission is returning to an emphasis on what manufacturer instructions for use (IFU) require, complemented by evidence-based guidelines or consensus statements from organizations such as the Centers for Disease Control and Prevention, Association for the Advancement of Medical Instrumentation (AAMI), AORN, Society of Gastroenterology Nurses and Associates (SGNA), and the Multisociety Guidelines.

“At first glance, EP 2 is a seemingly innocuous and simplistic statement. However, once you peel back and study the details of the IFU and one or more of these nationally recognized guidelines, the underlying processes contributing to HLD and sterilization are very complex with many moving parts, any one of which omitted or performed poorly spells potential trouble for your patient as well as for your survey result. This is why survey findings pertaining to standard IC.02.02.01 have ballooned from 15% in 2009, to 46% in 2013, to 70% in 2017, and to 75% in 2018,” he says.

The usual culprits for findings, Rosing says, are: Not adhering to manufacturers’ IFU, not following evidence-based guidelines, lack of validation of competency, lack of competent oversight by the manager of the area, or lack of involvement from infection prevention.

Clarification of standards, changes in scoring

More changes in September included clarification by the Joint Commission on how some devices will be evaluated for infection control during a survey. In addition, the Joint Commission removed several FAQs about high-level disinfection and sterilization from its website, promising to replace them soon with new answers or interpretations.

Endoscope “hang time” no longer scored. Most facilities had been following SGNA’s recommendation of endoscope hang time of 7 days, requiring that an unused endoscope in storage would need to be reprocessed every 7 days. AORN used to recommend a 5-day hang time and then went to “no recommendation.” The Multisociety Guideline group had no recommendations regarding hang time.

Facilities began following SGNA’s 7-day hang time because the Joint Commission implied that hospitals should follow the most stringent guideline.

The Joint Commission will no longer score based solely on chosen hang time; manufacturers’ IFU also must be followed, and endoscopes need to be stored in a manner that protects them from contamination. A surveyor will score as noncompliant any endoscope that is visibly soiled or dusty, or that hasn’t been reprocessed within the manufacturer’s time frame.

Individual packaging of instruments that touch mucous membranes. The Joint Commission will no longer require instruments that touch mucous membranes, which are considered semi-critical items on the Spaulding Scale, to be stored in individual peel packs. These items may be stored in other ways, such as open packaging and individual clean drawers or cabinets, as long as they remain protected from contamination. Storage must also be consistent with the device’s intended use and IFU.

This change could also pertain to the requirement that laryngoscope blades be individually packaged in the anesthesia drawer, he says, “but further clarification from the Joint Commission is needed before I would recommend doing that.”

Interestingly, the Joint Commission in September removed the FAQ that said laryngoscope blades had to be kept in a bag or in a peel pack.

“If this logic holds,” Rosing says, “ENT instruments also should be allowed in drawers unpackaged, which ENT physicians have been arguing in favor of for years.”

If there was blood or any bioburden on an instrument, they would score that it had not been precleaned properly. If they went to the soiled utility room and opened a tray or container that was ready to go to the decontamination area and saw blood, they would score that. They would go to the decontamination area early on Monday morning hoping to find instruments that were used earlier that day or on Sunday evening that had not yet been reprocessed. If they saw blood or organic matter, they issued a finding.

“The problem was that no matter how thoroughly you preclean at point of use, there are certain instruments that are nonetheless going to have blood on them when they go to the decontamination area because it is impossible or dangerous to get it off in the operating room or point of use,” says Rosing.

New wording now says there can be a finding only when: “Wiping/flushing of soiled instruments is not observed during a case in the operating room or procedure room, and it is clinically appropriate.”

Rosing says surveyors will not score a facility if they see visible blood on an instrument in the operating room or before it reaches the decontamination area of sterile processing. “They also are not going to score you if a staff member wipes an instrument during a case because it’s clinically appropriate to do so before handing it back to the surgeon to be reused,” he adds.

Now the Joint Commission has stated in writing, “there is no expectation that visible blood or tissue is to be removed at point of use.” The new expectation is that instrument cleaning should be performed in a decontamination area where staff are able to don appropriate personal protective equipment and have proper ventilation providing suitable air exchanges per hour and negative pressure.

Keeping instruments moist. Surveyors used to score if an enzymatic detergent was not sprayed on the instruments to keep them wet. “The misnomer is that the ‘wetting agent’ you choose to use may, but does not have to, contain an enzyme as one of its ingredients, and if you are following the AAMI ST79 guideline, there are options other than a spray wetting agent to keep instruments moist, for example, a wet towel,” says Rosing.

Surveyors will now score if they spot any nonconformance to an IFU or organizational policy, or if there is no process for keeping instruments moist.

“Surveyors had been erring by expecting to see both a spray wetting agent and wet towel, but now the Joint Commission has made it clear that, per AAMI guidelines, covering an instrument tray with a wet towel alone is sufficient, even if the towel is not in contact with every level or surface of every instrument.”

Transport containers.“The transport of dirty instruments in red, rigid-lid, biohazard-marked containers is now more nuanced,” says Rosing. The Joint Commission is now going to score according to requirements of the Occupational Safety and Health Administration (OSHA) applicable to transporting sharps. OSHA requirements for sharps say that containers are puncture resistant, leak-proof, and labeled or coded as biohazardous.

Non-sharps aren’t subject to OSHA and can be transported in a variety of ways as long as staff are not placed at risk for contamination or exposure.

Instruments in the closed position.A frequent finding to this point occurred when surveyors found single hinged instruments in peel packs that appeared through the package window to be closed. However, the instrument, such as a pair of scissors, may have been handled in such a way in central sterile or during transport to a unit that it closed after sterilization, says Rosing.

Now, only hinged instruments that are closed while going through the washer/sanitizer, or packaged ratcheted instruments awaiting sterilization that are locked, will be scored.

The Joint Commission now says such instruments will be scored if routine sterilizer monitoring of the biological indicator required by the state or per evidence-based guideline is not followed and recorded.

Implant loads that are released without routine sterilizer monitoring will be cited if a biological indicator is not present, except in emergency situations determined by facility policy.

Out with the old, in with the new

New survey criteria were effective as of September 2018, but Rosing says surveyors need time to adjust their approach. “There is a lot of ‘muscle memory’ in what the surveyors think they know about these topics,” he says. The changes will take surveyors some time to get used to. ✥

Centers for Disease Control and Prevention. Guideline for Disinfection and Sterilization in Healthcare Facilities. 2008.

Rosing J R. Knowledge is key: Be prepared for your next Joint Commission survey. OR Manager Conference 2018.

Editor’s note: This editorial is by Judy Mathias, OR Manager’s…

Sign Up Now
Latest Issue of OR Manager
August 2020