Extensive research by Cori L. Ofstead, MSPH, and her colleagues at Ofstead & Associates (St Paul, Minnesota) has raised concerns about insufficient reprocessing of gastrointestinal endoscopes and ureteroscopes—even when recommended practices are followed—and their new study makes a compelling case for more stringent reprocessing of bronchoscopes as well.

In their study of bronchoscope reprocessing at three large hospitals (two lung transplant centers and one center providing pretransplant and posttransplant care only), Ofstead and her team found insufficiencies in reprocessing similar to what they previously found with gastrointestinal endoscopes and ureteroscopes.

When the three hospitals’ administrators, physicians, and OR directors asked how much it would cost to shift to sterilization of bronchoscopes or single use, the researchers didn’t know.

Ofstead told OR Manager they decided if they were recommending sterilizing or single-use bronchoscopes, they needed to find out the difference in costs for high-level disinfection (HLD), sterilization, and single-use. They performed a cost study at four additional hospitals.

The bronchoscope reprocessing study was performed at three prestigious hospitals that were “top-notch” in terms of their programs, Ofstead says. They were using bronchoscopes in extremely vulnerable patients, many of whom either had a transplant or needed a transplant.

Ofstead and her team tested each of the sites’ bronchoscopes after they had been used in procedures and manually cleaned, and they tested them again after HLD. The tests assessed the presence of hemoglobin, proteins, and adenosine triphosphate (ATP), which indicates there are still cells remaining from secretions or bacteria. Next, they performed cultures to look for soil and viable microbes.

After the laboratory tests, they did visual inspections, looked at the bronchoscopes with magnification on the outside, and used borescopes to examine the inside. They also assessed the storage cabinets where the bronchoscopes were kept, and they audited the reprocessing practices.

Ultimately, Ofstead and her team assessed 24 bronchoscopes that were used clinically and two that were brand new and still in their shipping containers.

All of the clinically used bronchoscopes still had soil on them after cleaning, and all of them had visible irregularities after HLD, which included scratches and retained fluid or residue that was brown, red, or oily. They also found a number of damaged insertion tubes and distal ends as well as a lot of filamentous debris in the channels.

“Given that 100% of the scopes were still dirty and 100% of them had visible defects, it’s not surprising that HLD failed,” Ofstead says. Overall, 58% of the time, the bronchoscopes had viable microbes still on them after they were fully processed.

Ofstead notes that this finding was “sobering in part because of the nature of what was found.” Inside of the bronchoscopes were Stenotrophomonas maltophilia, which is a water-borne pathogen that tends to be carbapenem-resistant, and Escherichia coli, Shigellaspecies, which causes dysentery.

“Finding these in bronchoscopes is not good,” says Ofstead. “It introduces the possibility that the reprocessing methods used were introducing new contaminants.” 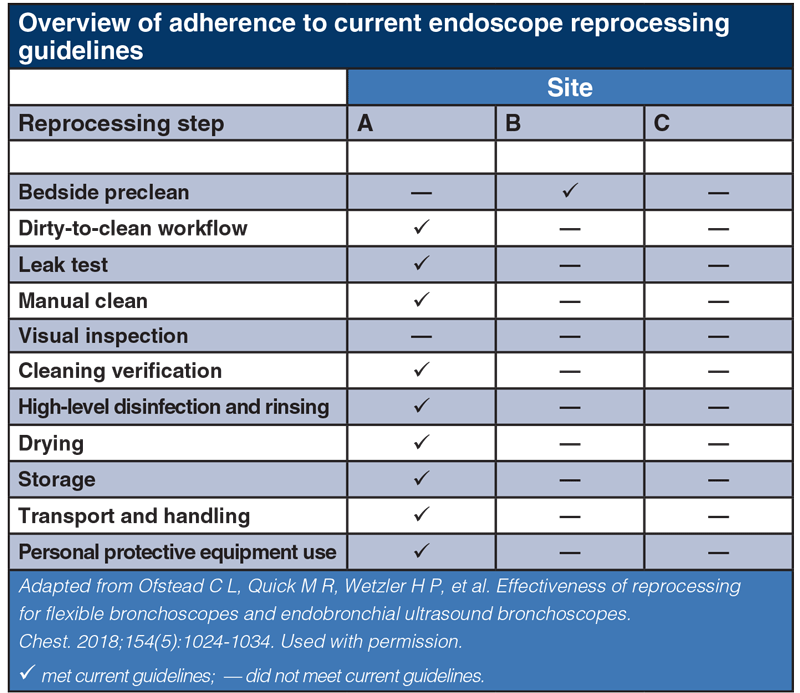 Because high contamination levels were found at all of the study sites, and they all used the same automated endoscope reprocessors (AERs), Ofstead says they questioned whether the facilities had contaminated sinks or contaminated AERs.

After manual cleaning, the amount of protein on one bronchoscope quadrupled, and they found bacteria that weren’t present before it was reprocessed—even though the bronchoscope had never been used in a patient procedure.

Only one of the three sites had the E coli, Shigella, but that site had the worst levels of contamination throughout and the worst reprocessing practices, she says. In addition, they were using damaged bronchoscopes (sidebar above).

The storage cabinets at two sites also were visibly dirty, and testing found high levels of ATP, indicating that there was organic soil in the bronchoscope storage areas.

One site had good reprocessing practices, and it also had the lowest contamination levels. Ofstead says this site was among the best she and her team have seen in the US.

The other steps that weren’t done well at the site with the best practices were lighted magnification and borescope inspections by central sterile personnel and visual inspections by personnel in the units where the bronchoscopes were used.

“All you had to do was look at these scopes, and you could see they were torn up and should be sent out for repair,” Ofstead says. “Even though all of the guidelines say you are supposed to be doing visual inspections every step along the way, they are not being done.”

In the other two hospitals, the reprocessing was “astonishingly bad,” Ofstead says. “They didn’t just skip one or two steps, they did virtually nothing in accordance with the guidelines or the IFUs [instructions for use].”

Quality standards were widely ignored, which was even more troubling, she says, because the perioperative services managers were aware this was happening.

The managers were aware of inadequate staffing and inadequate reprocessing, and at one site, the manager knew the cleaning cycle on the AER had been disabled to save time. “It may have saved them 20 minutes, but it cost them because they had highly contaminated scopes,” she says.

Ofstead notes that this hospital has taken action to fix its processes, but she doubts this would have happened had her team not confronted its leaders with their findings.

In a meeting with the hospital’s executives, Ofstead and her team recommended that they shift to sterilization of the bronchoscopes, retrain all personnel, and only use single-use bronchoscopes until they could turn their program around.

They already had some single-use bronchoscopes in their emergency department (ED), and the pulmonologists were open to using them, but they had never used them in the ICU or OR before, she says.

To answer questions about costs for single-use, HLD, and sterilization of bronchoscopes, Ofstead and her team conducted a cost study in four additional smaller sites. They also wanted to know if their findings in the three large tertiary hospitals would be the same in the four smaller sites.

The researchers sought to learn when and where in these smaller hospitals bronchoscopes were used, where they were stored, and who was responsible for reprocessing them as well as the costs of personnel time and acquiring, maintaining, and repairing bronchoscopes.

Ofstead says one of the things they learned was that bronchoscopes are used 24/7 all over the hospital and that the storage areas were dependent on what unit the bronchoscopes were being used in.

“I thought personnel went to central sterile to get them, but that is not the case. They generally keep at least a couple of them in each unit, and one hospital had them on every crash cart,” she says. “It made sense,” she adds, “but they were stored horizontally in a bag, which was concerning.”

Ofstead and her team designed some worksheets for the four new sites on which staff had to list what brand and model of bronchoscopes they had, how many they had, and where they were stored.

All four sites had trouble locating their bronchoscopes. This was due in part to one or two bronchoscopes being kept in multiple departments, like the ED, the OR, and the ICU for emergency use, she says.

Bronchoscopes were frequently not returned to the central sterile department for reprocessing immediately after procedures. When staff looked for bronchoscopes, they found them on carts or still in the procedure rooms, having not been reprocessed for several days.

One site reported having four bronchoscopes in their endoscopy unit. A month later they found a fifth one that they did not know was stored in another unit.

A few months after finding the fifth bronchoscope, staff at this hospital found two more bronchoscopes in the OR that were not on the central sterile inventory. At that time, the infection preventionists discovered that the bronchoscopes were not being properly reprocessed between uses.

“The key thing here is that the bronchoscopes at these sites were used all over the hospital, and they were not being reprocessed by staff who were trained and certified in endoscope reprocessing or by central sterile personnel,” Ofstead says.

In addition, central sterile personnel told Ofstead that on Monday mornings, they often found dirty bronchoscopes that had been used over the weekend. They never knew where or when they had been used, or whether they were precleaned.

For the most part, Ofstead notes, bronchoscopes were being reprocessed by nurses, medical assistants, respiratory therapists, and anesthesia personnel who did not have adequate reprocessing training or competency testing. Many of these clinical personnel did not reprocess bronchoscopes frequently and found it challenging to remember the steps each time.

The turnaround time for bronchoscopes reprocessed in central sterile or the endoscopy unit was 41 minutes at the fastest site and almost 2 hours at another site when HLD was used.

“By cutting corners, they could get the reprocessing down to about 40 minutes, but it became clear to us that at least an hour and a half was needed to do everything properly,” she says. 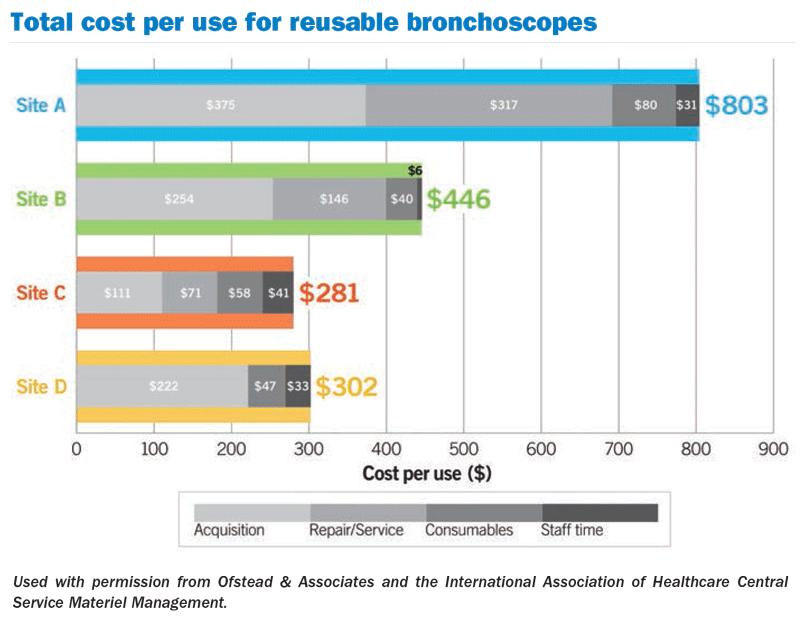 The other key takeaway from the study, Ofstead says, was that inventory management drove the cost, and the cost of acquiring, maintaining, and reprocessing reusable bronchoscopes was higher than they thought it would be, at $280 to $800 per procedure (sidebar at right).

This was driven by the fact that these facilities had many more bronchoscopes than they needed for the number of procedures they were doing. Most of the bronchoscopes were used less than once a week. One site was only using each bronchoscope 16 times a year.

“This is very expensive,” Ofstead says, “considering they pay $30,000 to buy a bronchoscope and several thousand dollars a year for maintenance, and they don’t use it.”

This made the single-use bronchoscopes look more appealing at $220 to $315 per bronchoscope, particularly if the sites have low procedural volume and staff are using them for a lot of after-hour procedures.

Another finding of the cost study was that when bronchoscopes were sterilized, the reprocessing turnaround time was 46 minutes longer than with HLD, which required 41 to 109 minutes.

Sterilization also requires machines that are more expensive than AERs, plus additional supplies, such as sterilization trays, wraps, dust covers, sterilant, and chemical and biological indicators.

“It seems clear,” Ofstead says, “that more than any other type of endoscope, we need to do something to improve personnel competence, inventory management, reprocessing effectiveness, and storage of bronchoscopes.”

Ofstead recommends having a couple of complex reusable bronchoscopes needed by pulmonologists for advanced procedures, and using single-use bronchoscopes for the rest of the procedures whenever possible, particularly when they’re done after hours or in remote units that may not be able to ensure timely reprocessing.

She strongly recommends that if a facility decides on reusable bronchoscopes, they should be reprocessed and inspected by central sterile and not clinical personnel.

And finally, Ofstead recommends having experts perform periodic audits and provide consultation to ensure that regulations and standards are followed. ✥ 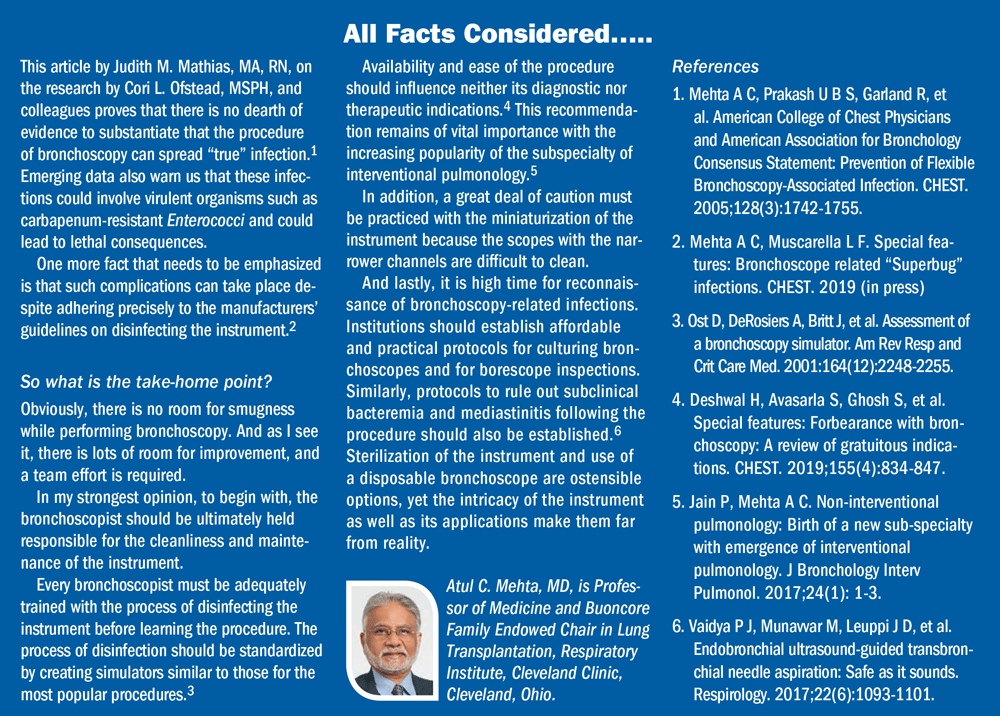 Perioperative Crossroads: Fostering the “One Team” Philosophy to Improve the Patient Experience

Sign Up Now
Latest Issue of OR Manager
March 2021