Among the many variables that influence on-time starts of surgical cases are the arrival times of patients and staff, as well as the verifications and documentation required before patients are brought to the OR. Increasing on-time starts was a key initiative at Fox Chase Cancer Center. By exploring the influences of nursing performance related to first case on-time starts (FCOTS), Fox Chase nurses identified the barriers contributing to the delays. Revising and implementing new workflows increased FCOTS from 36% to 79% within a few months.

Fox Chase Cancer Center, a 100-bed hospital with eight ORs, specializes in oncology and is a member of the Temple University Health System in Philadelphia.

When first surgical cases are late, subsequent procedures can also fall behind, causing dissatisfaction among patients and their families as well as overtime costs related to staffing and OR case costs per minute. This is a problem that plagues many ORs, but it’s not just the OR that is directly involved. It all starts from the moment the patient decides to have surgery.

The domino effect begins with preadmission testing (PAT), the preoperative area, and the OR. Surgeons, nurses, aides, and staff from areas such as the lab, blood bank, wound ostomy, nuclear medicine, and mammography—to name a few—need to be involved for successful on-time starts. Each entity is a link in a chain that connects to the patient, and each affects the start time, which means it’s important to understand the bigger picture in bringing the patient to the OR on time.

We first looked at the role of the preoperative nurse and how nurse practice affected on-time starts. Anesthesia providers and surgeons noticed patients were not dressed in a timely manner, which caused delays in starting an IV or marking the patient prior to the procedure.

Historically, the unit was staffed with three nurses who were responsible for preparing the first eight patients before entry into the OR.

When a new surgical initiative, ERAS (Enhanced Recovery After Surgery), was rolled out, more time was needed to prepare surgical patients because a series of other preoperative steps were added. These included default glucometer checks and administration of ERAS medications based on creatinine clearance levels, which the nurses had to calculate by obtaining real-time height and weight.

Often, orders were confusing to new fellows and surgeons, so additional follow-up telephone calls were needed to clarify the desired order. Even though the number of first cases did not increase, the nursing staff began to get worn down from the added responsibilities that contributed to delayed care.

Furthermore, the nurses were double-documenting in the paper chart. Anesthesia providers and surgeons looked at their respective sections in the chart to find information and write orders instead of having one unified area. Each service wanted nursing to document information in their sections. Consequently, there were missed orders, delaying the overall FCOTS, and physicians had to look for a nurse to get the information if he or she could not document it in time.

Essentially, each preoperative nurse functioned not only as the primary nurse but also as the unit secretary, nursing assistant, transporter, if needed (there was only one staffed on the unit), and “chart hunter.”

Staff often walked away with charts and did not return them to the chart rack, which delayed signing off on the chart. Because the preoperative nurse is considered the last “hard stop” before going into the OR, the nurse cannot sign off on the chart until all other services have completed their portions.

Moreover, communication between the OR and preoperative staff was lacking. An electronic board denotes patients who are ready to come back to the OR according to a “patient ready” identifier from the preoperative nurses. Because nursing staff were not compliant with using this communication tool, OR staff would call the preoperative area multiple times to find out which patients were ready to go back to the OR. If the OR could not reach that nurse, staff would have to wait for a return call or leave the OR to find the information.

Additional findings that contributed to the delayed on-time starts included surgical procedures requiring transfusion of blood. Without cross-matched blood readily available in the OR refrigerator before the start of the case, the surgical case could not start.

Although the number of first cases remained the same, the tasks required of the preoperative nurse began to mount. With the fluctuating volume of patients in the OR schedule for outpatients, inpatients, and same-day admission patients, justifying a full-time position for nursing was not a viable option. Consequently, two per diem certified nurse assistants (CNAs) were hired to supplement the nurses for day and evening shifts, and pool RNs were added based on volume.

The nurses redistributed tasks to be completed by the CNAs in a time-efficient manner. The goal was to bring all of the patients into the preoperative area instead of the waiting area until a nurse was available. Hence, nurses and aides would continue to bring patients back until all the bays were full.

Patients without a nurse would be cared for by the CNAs, who would complete vital signs, glucometer checks, and any additional nursing aide-related tasks. Expectations such as assisting transport by taking blood work to the labs or bringing inpatients from the floor to the preoperative area were added to the CNA’s responsibilities to ensure continuity.

Additionally, the nurses determined that anesthesia providers and the surgical team do not arrive until 30 minutes after patient arrival for first cases. Thus, their goal was to ensure patients were changed into a gown and their nursing care was completed within that time frame. This increased efficiency and reduced interruptions of the nursing assessment.

We also implemented an electronic medical record (EMR) system tailored specifically for the perioperative patient in the preoperative area to document medication administration, results of human chorionic gonadotropin, blood sugars, and nursing assessments. The same EMR system had been implemented a few years earlier in the OR and the postanesthesia care unit. However, nurses in the preoperative area were using a different EMR system for data mining—thus, they were not using the same system as most of the perioperative staff.

The newer EMR system is used primarily for real-time care in the preoperative area, and it has helped speed up documentation. Nursing staff had a lot of input in the design of the flowsheets, and as a result, they were receptive to training even though it took place on weekends. It took approximately 3 months of preparation and another 2 months to resolve the bugs and adapt to the new system.

Discussions with the preoperative nursing staff regarding lack of usage of the electronic “patient ready” board revealed deficiencies in education. According to feedback from staff, some nurses “did it anyway” because that was what they were taught, most did not understand the importance of using it, and others simply “forgot.”

Consequently, reinforcement and education were provided to all preoperative nurses through roving in-services to explain the ‘who, why, when, and how’ of using this electronic system. It alleviates gratuitous telephone calls, enhances communication between OR and preoperative staff, and serves as a resource for all members of the perioperative team.

Once the staff understood the rationale, the next step was to hardwire this into their daily practice with positive reinforcement, such as free luncheons and unit-themed parties.

A new process between PAT and the preoperative area was also designed to alleviate delayed starts attributed to any delay in blood availability in the OR. PAT staff would draw both the type and screen and ABO blood group tests during their PAT visit. Preoperative nurses would call the patient the night before and screen them for transfusion while providing their surgical report time (typically 2 hours before the scheduled OR time). Cross-match orders were written accordingly the night before and faxed to the blood bank.

The morning of surgery, the transport orderly and nursing have a short huddle on blood that needs to be picked up from the blood bank so it’s ready in the OR refrigerator for the first surgical cases.

It took at least 3 months to fine-tune these new practices and ensure that staff used them consistently. 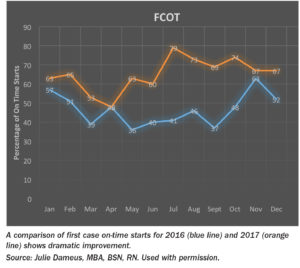 These initiatives were implemented in mid-June 2017. There has been a dramatic increase from 36% to 79% within weeks for on-time surgery starts (sidebar right). Since implementation, FCOTS have been consistently higher compared to no intervention in the prior year.

Exploring the needs of the perioperative department and other entities involved in surgical cases helped us determine where we needed to start to improve our FCOTS. Preoperative nurses identified barriers to their job performance related to double documentation, education, autonomy, working relationships with interdisciplinary staff, and satisfaction.

We learned how nurses influence a large part of the daily perioperative flow, which could either be negative or positive depending on how we best equipped them with knowledge and resources. Overall, engaging nursing staff in making changes helped improve FCOTS, OR communication, and patient and nursing satisfaction. ✥

Part 1 of this two-part series discussed the splashes and…

Increased tensions during the COVID-19 pandemic have contributed to a…

The Joint Commission on June 18 issued prepublication standards for…

Sign Up Now
Latest Issue of OR Manager
August 2021